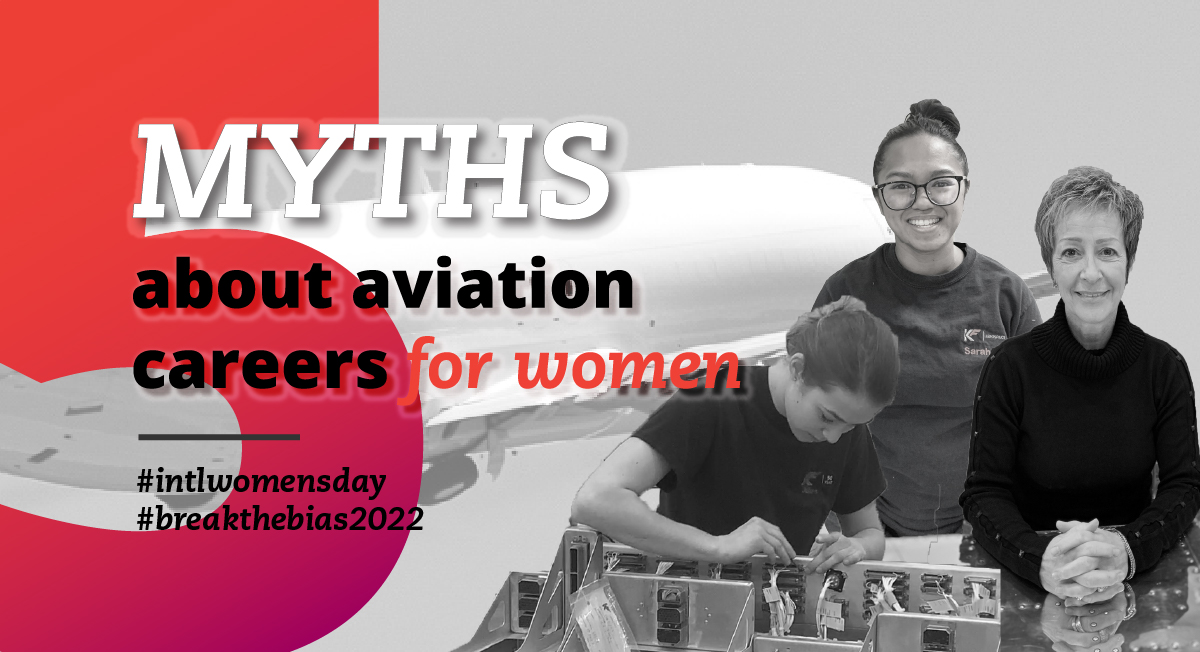 Myth #1: Mechanical skill is something you’re born with.

“I wasn’t planning on a career in aviation, I stumbled into it. I had attended university, but it wasn’t what I wanted. I was trying to figure out the next steps when I happened upon KF Aerospace participating in a skills competition in downtown Kelowna. I looked into their career opportunities and went from there.”

“I’m crafty, but I was unsure of my mechanical ability. I didn’t think I was skilled enough. But I learned so much in school and on the job. You learn super quick.”

Myth #2: Working on aircraft is a dirty job.

“There are tons of trades that branch off into all kinds of jobs. While aircraft mechanics will be greasing the limbs of the aircraft, the landing gear, dealing with hydraulic fluids, oil and fuel—Structures AME’s deal with the body of the aircraft, they form the metal and walls of the plane. But not all the trades are greasy. In Non-Destructive Testing (NDT) you’re creating reports and documents of your findings on the aircraft. In Avionics we’re working with wire. It’s like threading a needle, weaving and blending wire together in the plane for a seamless result. For me it’s kind of like a puzzle. It’s challenging, but it’s also kind of calming.” 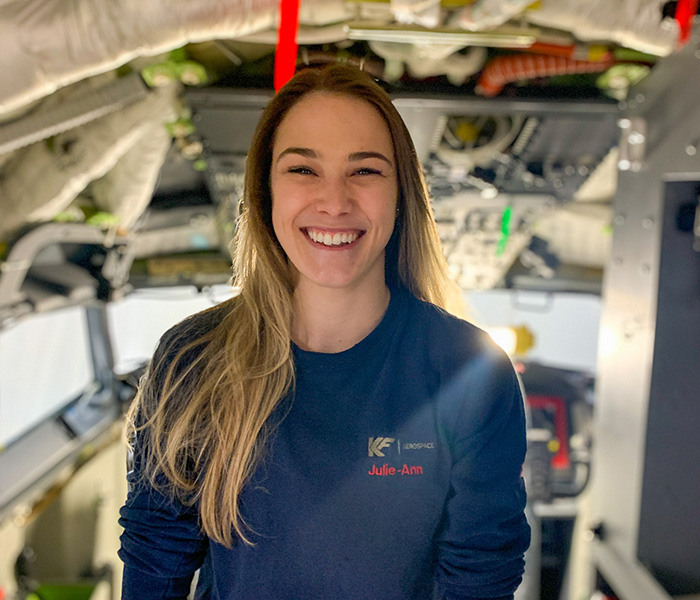 “I’ve been an aircraft painter for over 15 years. We do everything from stripping and prepping the plane, to painting, finishing and polishing. Ours is the final touch—everything you see is what we do. Our motto is pride in detail.”

“The customer comes to us with different designs, and each time it’s a new challenge. Sometimes it requires that we freehand a design. You learn to go with the flow and find creative solutions. I’ve painted all types of aircraft, including helicopters and the RCAF Twin Otters. I love doing specialty projects—the more complicated they are, the more rewarding it is. When I take a step back and look at a finished design, I think wow, I did that.” 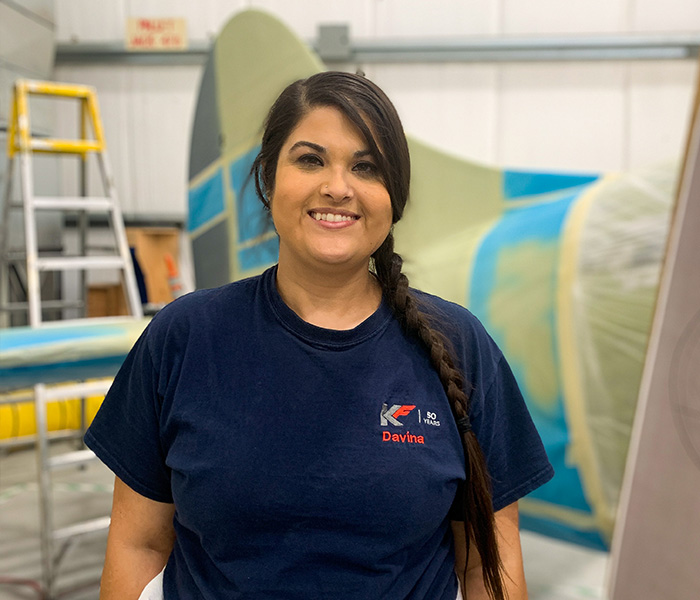 “Before I started my aviation career in 1993, I barely knew a nut from a bolt. My first role was issuing parts and tools for aircraft maintenance. With a strong customer service focus, positive attitude and drive to learn, I received several promotions at KF Aerospace over 5 years. Throughout my career I’ve had the opportunity to work with different companies, in different cities, managing materials for everything from major jet engines to helicopter avionics equipment. Last year I had the privilege of returning to KF as Supply Chain Manager. I’m really glad that I stayed in the industry—I’m exactly where I want to be .”

“The amazing thing about aviation is that there’s something new to learn every day. For anyone coming into an entry-level role, if you’re interested and engaged and want to learn, the opportunities are endless.” 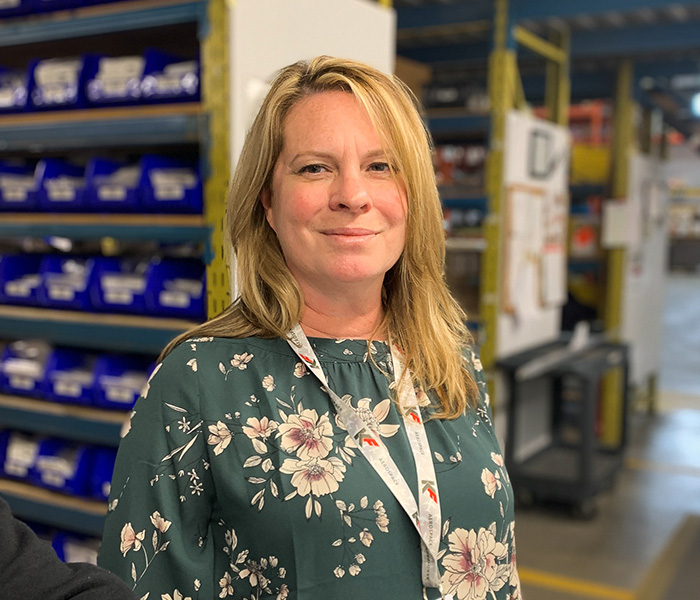 “After finishing law school in the 80’s it was difficult to find an articling position. I managed to find an articling job in Yellowknife. I later found myself working as in-house counsel in Regina and it was then I realized that I wasn’t going to love practicing law and started to look for alternatives. My dad had a friend who owned an air service in Saskatoon. I phoned him up out of the blue and explained that while I didn’t know anything about aviation, it struck me as something really interesting and that I was prepared to work hard at it to learn the business. My first day on the job, I was handed a cocktail napkin that had an airplane deal written on it. Next thing I knew I was on a plane to Italy to sort out the aircraft purchase. That was the beginning. I just tried to do my best. I wasn’t scared to ask stupid questions. Sometimes it was totally frightening, but I found more often than not, people were there to help me out.”

“I believe that where you take your career is up to you. If you plant that seed in your mind of what you really want to do, in aviation or any other career, you will end up there. It might not be a straightforward journey, but there will be all kinds of opportunities to help you get there.” 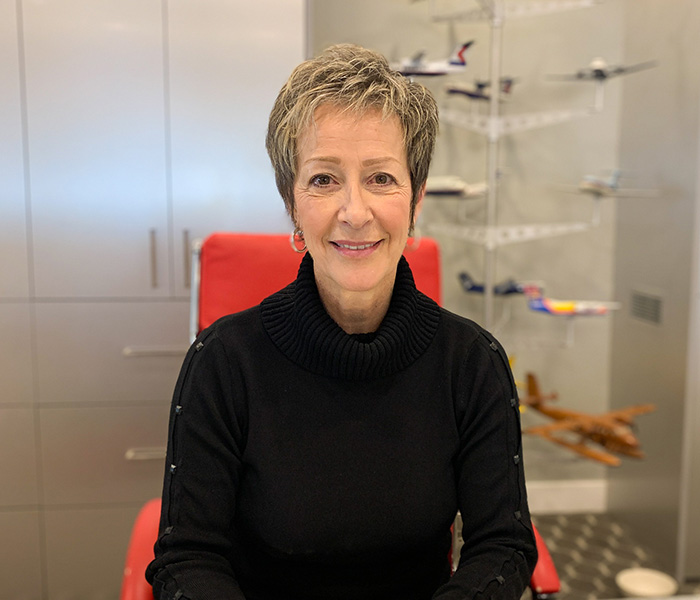 “For me, leadership really comes down to team work. It’s being able to incorporate others, recognizing their skills, and also knowing when to ask for help. Nobody can be an island unto themselves.”

“Driving the KF Centre for Excellence project has been absolutely uplifting. It’s a privilege to work with so many talented professionals each day and see everyone come together as a team. It’s a legacy we all get to be a part of.”

– Paula, Executive Director for the KF Centre for Excellence 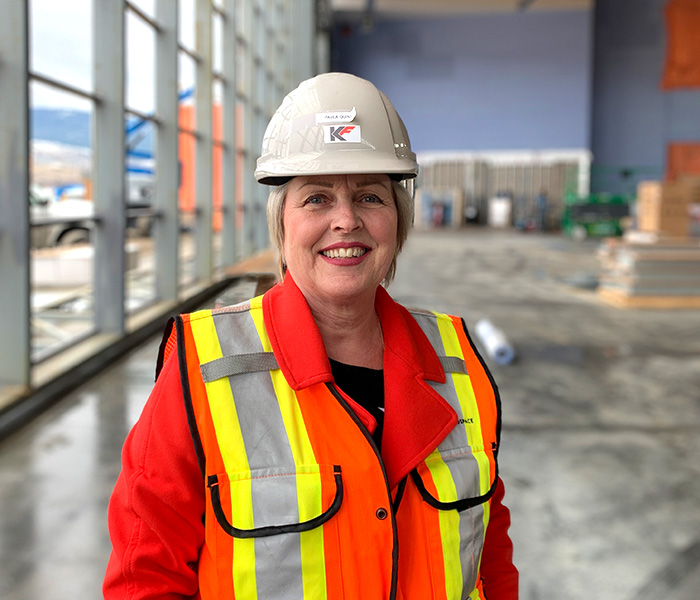