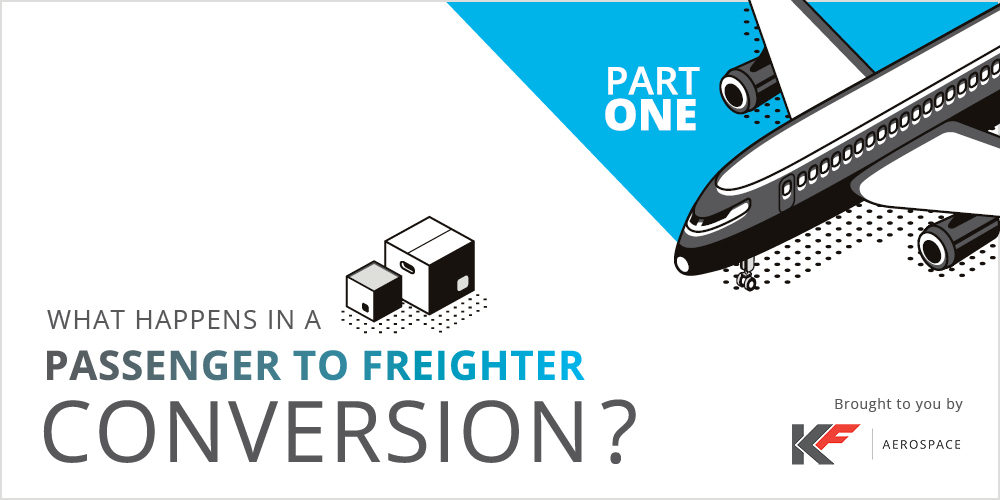 Heavy Lifting (pt. 1): What happens in a passenger to freighter conversion?

What does it take to transition a passenger aircraft into the big business of air cargo? In Part 1 of this feature series we take you inside one of the heaviest structural modifications in aviation!

Starting at the Bones

A modification project of heavy proportions is underway on one of KF’s own Boeing 737-400 aircraft. Recently returned from a customer lease, the plane has been stripped of its interior furnishings and exterior livery, ready for a new calling.

“It flew for 11 years with Flair Airlines,” says KF Project Supervisor, Alan White. “Its life as a passenger aircraft has come to an end, but it will fly for many more years moving cargo.” While the 1991 aircraft is retiring from passenger service—it remains an economically viable candidate for moving freight.

The transformation will require a multi-faceted passenger-to-freighter (PTF) conversion program culminating in the addition of an 11ft wide hydraulic-powered cargo door.

“We cut a large opening into the side of the fuselage to fit the door,” White says. “It’s a huge undertaking.”

Well before the door goes in, KF will complete a heavy maintenance check on the aircraft followed by structural reinforcements that prepare the airframe for a cargo door opening and future loads. 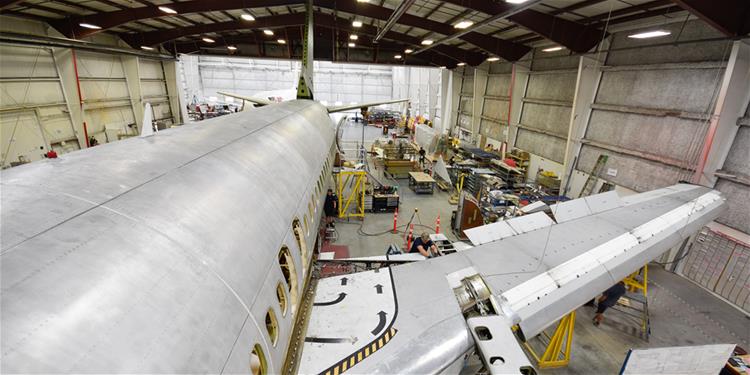 “We start by shoring the aircraft and replace the door opening’s surrounding skins from fuselage station 360-500C, stringers 22L to stringer 3R and install an internal support jig,” he says.

“Next we reinforce the surrounding structure by installing new horizontal and vertical jambs. While this is in progress, we work on floor beam modifications to support the extra weight of the freight.”

“Additional seat tracks are added for the cargo loading system along with a new freight interior. We also deactivate the passenger systems and install electrical wiring modifications required for the conversion.”

The cargo door itself comes as a kit supplied by AEI, Inc. for which KF is an authorized conversion center. (Stay tuned for Part 2!)

Over the next few months, White will be guiding multiple crews of Aircraft Maintenance Engineers (AME’s) through the project, including structures, avionics and maintenance technicians.

“We have skilled people with a high level of expertise and capable apprentices,” White says. Complex tasks, like skin replacements and floor beam modifications, will challenge the team in their hand skills and ability to work from technical drawings.

Structures apprentice, Jordan Reefke started at KF just three months ago. A recent grad from the Southern Alberta Institute of Technology (SAIT) in Calgary, he’s feeling lucky to cut his teeth on the project. “It’s been awesome! It’s intimidating but I have the support to get through it and take it day by day. I’m having a lot of fun.”

Reefke is following the lead of Structures-AME, Allison Campbell. With 10 years in the trade, it’s her third time working on a PTF conversion.

“This is all about hand skills,” she says. “This is trimming parts, fitting parts, drilling holes. One drawing package will work with another package, so you’ve got to think five steps ahead.”

Focused on job quality and efficiency they expect to complete the conversion in under five months—and by mid to late 2020, KF aims to run two conversion projects simultaneously.

“I could keep doing this for life. It’s challenging but you get to stand back at the end of the day and look at what you’ve created. That’s the coolest part. Soon those windows will be gone, and everything will be green with new skins.”

“It’s like a whole new airplane when we’re done with it.” 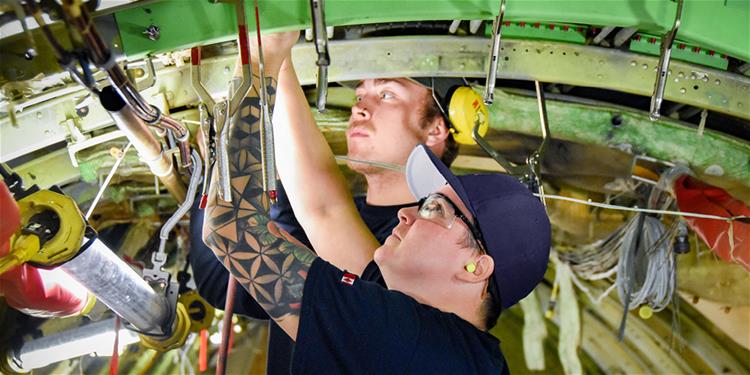