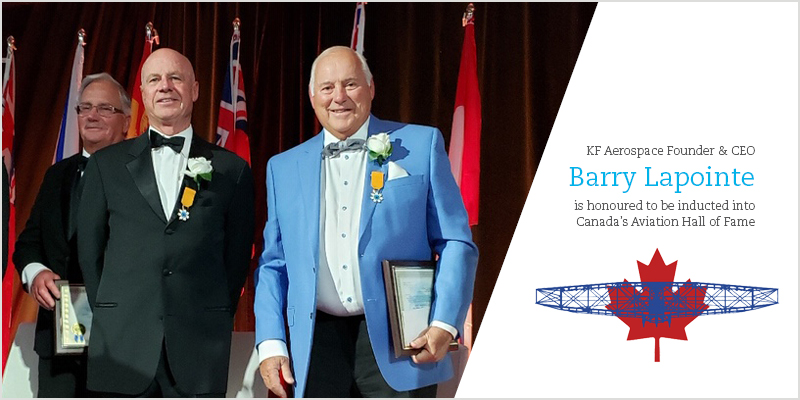 KF Aerospace is excited to celebrate the induction of its founder and CEO, Barry Lapointe into Canada’s Aviation Hall of Fame. Joining other accomplished leaders and innovators, Lapointe attended the 46th Annual Induction Ceremony on May 16th at Montreal’s Laurent Beaudoin Completion Centre.

Lapointe was recognized for his work over the last 50 years in building KF Aerospace into one of the largest and most respected commercial aircraft maintenance, repair and overhaul (MRO) operations in the world. He started the company (then Kelowna Flightcraft) as a one-man venture in 1970, servicing small aircraft from the back of his truck. In 1974, he launched KF Air Charter and from 1976 to 2015, KF operated nearly 20 aircraft carrying cargo daily across Canada for Purolator and Canada Post.

Today KF employs over 1,000 people with a payroll in excess of $70 million annually, providing a range of leading-edge services, including RCAF aircrew training, flight operations and commercial delivery. Lapointe remains actively involved in the company as KF’s CEO and Chairman and has given back over $32 million to his employees through the Barry Buck’s Incentive Program.

Lapointe was also credited for his work in bringing new generations of students to the field of aircraft maintenance. He was instrumental in creating BC’s Aircraft Maintenance Engineer (AME) Structures Program currently operated by Okanagan College, has made multiple donations to AME training programs across Canada and this year announced the construction of a state of the art training facility with Mohawk College in Hamilton, Ontario.

Lapointe’s legacy is also felt outside the industry, through major fundraising initiatives for the Kelowna General Hospital Foundation and through the KF Charitable Foundation established in 2003, supporting causes across Canada including the United Way, the Heart and Stroke Foundation, the Kids’ Cancer Care Foundation and Girls Fly Too.

Lapointe graduated with Honours from the British Columbia Institute of Technology (BCIT) AME program in 1966 and holds an M1 and M2 license. Today he has more than 17,000 fixed-wing flight hours.

“An aviation engineer and pilot, Barry Lapointe is the founder of KF Aerospace. For half a century he has developed his company to provide charter and cargo service, aircraft maintenance, and training of Canadian military pilots. His philanthropic support of aviation and civic organizations has been instrumental in their success.” (Induction Citation, 2019)